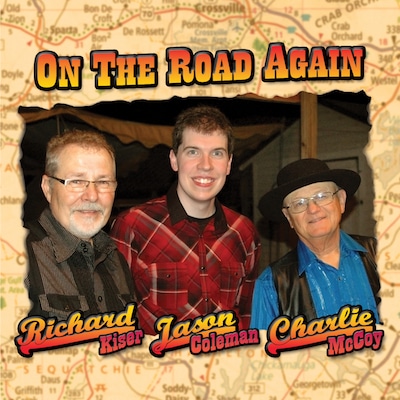 On The Road Again

On The Road Again is a collaborative instrumental album featuring Jason on piano along with Richard Kiser on guitar and Charlie McCoy on harmonica. The dynamic trio perform together frequently in concert, and this album highlights some of the most popular songs from their crowd-pleasing performances.

Richard Kiser is a fingerstyle guitarist who plays in the style of his guitar idol, Chet Atkins. Richard tours full-time in solo country gospel guitar concerts, sharing his music and his testimony with audiences across the country. Among other honors, he has been named the International Country Gospel Music Association’s Instrumentalist of the Decade and was recently inducted into the Country Gospel Music Hall of Fame.

Charlie McCoy is a living legend on the harmonica. He has been a fixture in the Nashville recording scene for more than 50 years and can be heard on some of the most famous songs in all of country music. In addition to the more than 12,000 recording sessions he has been a part of, Charlie has released over 35 of his own albums. He also served as the musical director on the popular TV series “Hee Haw” and currently tours in concerts across the U.S. and around the world. Charlie has won a Grammy, two CMA Awards and seven ACM Awards, and in 2009, his induction into the Country Music Hall of Fame was further proof of the lasting impact he has made on the music industry.

The unique combination of Jason’s piano, Richard’s guitar, and Charlie’s harmonica simply has to be heard rather than explained. Each artist’s unique style is put in the spotlight through the fun, familiar songs on the album – and when their styles are put together, the result is something truly special. Just one listen and you’ll be saying, “I can’t wait to get On The Road Again!”

Click the BUY button to purchase On The Road Again on CD.
Or find it on your favorite streaming or digital download service.

Return to ALL ALBUMS