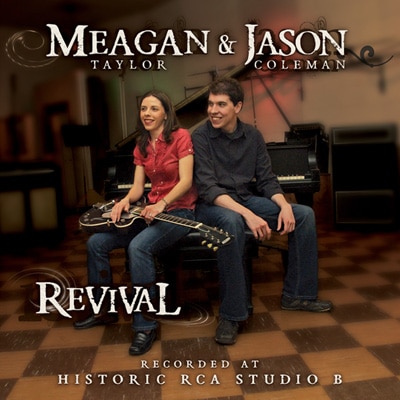 Jason teams up with Meagan Taylor on Revival, a collaboration that truly revives the musical relationship of Jason’s grandfather, Floyd Cramer, and Meagan’s great-uncle, Chet Atkins. Released in 2007, it is the debut album for the two as a duo.

Revival features Jason on piano and Meagan on guitar, and both of them lend their voices to most of the songs, as well. Among the host of talented musicians featured on the album are Nashville A-Teamers Charlie McCoy on harmonica and the late saxophonist Boots Randolph, who recorded and toured with Floyd and Chet for many years and passed away just months after production. The songs on Revival cover an eclectic range of genres, from country to jazz to folk to gospel, but they are all bound together by Jason and Meagan’s beautiful harmonies and complementary playing styles.

Adding to the uniqueness of Revival is the fact that the album was recorded at Historic RCA Studio B in Nashville. In the studio’s early years, Floyd and Chet, along with an astounding roster of music legends spanning all genres, recorded countless hit songs within its walls. In 2007, on the 50th anniversary of its opening, how special it is that RCA Studio B is where Jason and Meagan teamed up to record their very first album together, as well.

Click the BUY button to purchase Revival on CD.
Or find it on your favorite streaming or digital download service.

Return to ALL ALBUMS